You think this banner is big enough?

Alrighty I wrote about the experience of going to the movies in Japan so I guess I should write about the movie itself.  No spoilers because I’m a peach.

I probably don’t have as strong a connection with Star Wars as some people do.  Sure, I grew up watching and loving my old VHS copies of the original trilogy but, aside from an ill-fated foray into one of those largely indecipherable expanded universe sequel novels (Seriously, those things are hard to read as hell, how do you people do it?!), I was never one of those “I like this thing so I’m going to devote myself fully to it like I’m a member of some cult in Nicaragua” people.  The prequels came out when I was in the prime Star Wars appreciation demographic range as well, meaning that my Star Wars appreciation capabilities were severely hampered by either Jar Jar Binks or the increased focus on diplomacy and tariffs.

That said, I still harbored a soft spot in my heart for Luke, Han, and Leia, and the ridiculously pulpy fun atmosphere of the original three, which meant I was more than a little excited to be able to see what the old gang was up to all those years laters.  Instead, I wound up falling in irrational love with a new generation of heroes instead.

Seriously, Daisy Ridley, John Boyega, and Oscar Isaac (who already is rising through the Hollywood ranks faster than a Star War nerd’s nerd boner watching the movie for the first time despite having two first names and no last name) are all probably going to be major stars, having just owned perhaps the hardest roles to play in Hollywood that aren’t the apes in Planet of the Apes and stolen the show from a surprisingly lively Harrison Ford and a Chewbacca that finally got to do something beyond standing behind Han and roaring for the majority of the movie (as fun as the first three movies are, Chewie literally does less to help the Republic than a bunch of freaking teddy bears).

This movie is fun.  Plain and simple.  Even if it didn’t come with the baggage and expectations of the name Star Wars, J.J. Abram’s film would have probably still made a huge impact in the box office and the hearts of minds of children everywhere simply because it is fun, dramatic, and moves in huge operatic fashion.

Sure, there are plot holes and there’s nothing particularly “groundbreaking” but you don’t go to a Star Wars movie expecting the intricate plotting of some French indie flick about a young smoking boy coming to the realization that he’s actually a chick inside or something and winning bunch of Oscars in the process.  You can have fun without knowing everything and Star Wars is the perfect embodiment of that idea.  Why is Luke missing?  Bad things.  What bad things? Who cares?  All that matters is that he’s missing and bad stuff is happening and BB-8 is ridiculously emotive for a puppet.

But the prophecies from the last six films never said anything about the dark side still being around after Darth Vader died.  Who cares?  Sit down, shut up, and enjoy the ride, replete with John Williams score, weird aliens that look mostly like humans with various animal parts attached to them, a giant planet shaped weapon with yet another massive design flaw (seriously guys, if I were a bad guy in the Star Wars universe, I’d probably work on designing a super weapon without the same exact weakness and/or less obvious), and C3PO being annoying.

Considering the craptastic three films preceding The Force Awakens just be glad we got something watchable.  It’s okay to stop worrying now.  Everything will be alright if you let it.  Now sit down, shut up, and give Lucasfilms all your money. 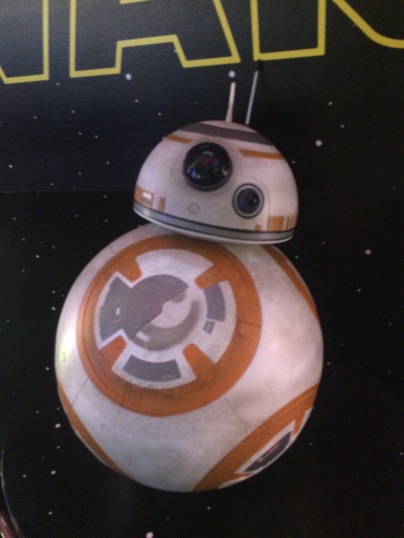 PS The movie theater I went to
had a working BB-8 on a pedestal which seems like a waste of a rolling robot but since it’s Japan they were probably concerned about it getting the floor dirty or something.

PPS Dear movie executives, please put Daisy Ridley in every movie from here on until when she gets old and dies and/or marries a Moroccan prince.  Thank you.

PPPPS Want to see me do improv in Japanese?  (You probably don’t but please pretend that you do and come to my show anyway)  I’ll be doing a show next year for you all to enjoy.

Hit me up if you want tickets (or go ahead and get them on your own)!  I need your support because the Japanese entertainment system is sorta like a Ponzi scheme and stuff so I sorta need you guys to buy in for me to get ahead. 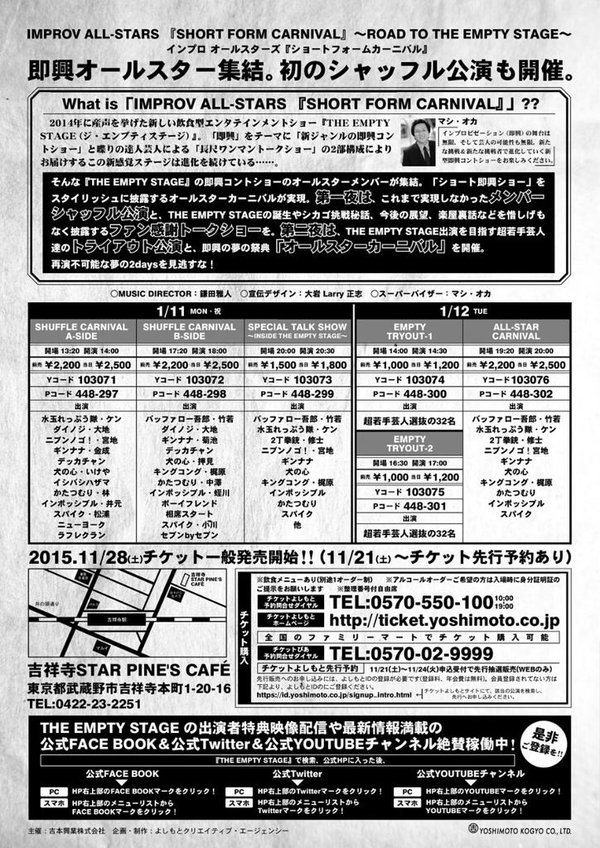 One thought on “Star Wars: The Review No One Will Read Awakens”