So we’ve beaten the whole Netflix horse for a while now and talked about introducing a manzai to the world (at least that was the idea) but what about my terrestrial career (i.e. the non-English language media)?

The Japanese new years holiday is one of shuttered shops and clogged transportation networks (interestingly enough, everyone is so busy getting out of Tokyo that the capital becomes an absolute breeze to get around for the week).  It is also, most helpfully for me, a time for people to gather around and watch a shitton of TV.  Almost every single popular program on television will put together a several hour long special show to be shown in the week around New Year’s Day as the Japanese public apparently still hasn’t figured out (a) how to use a DVR, (b) that you can watch almost anything you want on a streaming service, (c) the more time spent watching your favorite personality ham it up on screen means less spending quality time with your loved ones.

Yes, in Japan, on New Year’s, television is still king.  And thanks to the national network’s ravenous need to fill airtime with original “special” programming, this means young struggling comedians such as myself find themselves with increased opportunity to see some airtime.

Me being a relatively rare asset in the Japanese entertainment industry, I wound up working on a couple of shows and somehow not being left on the cutting room floor.

The main thing to keep in mind going into Japanese showbiz that you should be aware of is that you will be stereotyped and chastised for not following through on those inherently obvious “guidelines” set forth for your role.  In my case, as I am an American, I was of course “strongly encouraged” by producers/people at my agency/senior comedians to play the American gaijin card.

The lesser of my two television outings this new year’s special season was a nonspeaking role, albeit on one of the biggest shows in Japan during prime time on New Year’s Day, consisting of me dressing in drag and getting made-up to look like a granny as much as a 25-year-old dude with a full beard can.  The ten hour long filming session largely consisted of me and twenty other dudes in drag bull charging a Japanese football player and yelling like our wigs were on fire.  But, hey, one of the members of TOKIO slapped me on the ass so that’s cool I guess.

Even though I was never mentioned by name in this role, I wound up getting a disproportionate amount of close-up shots (one of the perks of being a Yoshimoto talent, I guess), leading to several dozen of my friends and fans sending me hastily taken photos of their television screens.

My second appearance was on a late night television show hosted by perhaps the most powerful personality on Japanese television who isn’t Takeshi Kitano or in Johnny’s.  I’m talking of course about Akashiya Sanma, a mainstay on Japanese television for the better part of the last forty years.  Currying Sanma’s favor can make or break a career and many a talento has gone on to become a breakout star after an appearance on the man’s show.

As one of over sixty different owarai combis in the huge peanut gallery for this special program, my combi (Iruka Punch) seemed likely to be passed over.  This was, after all, only our second television appearance ever.  But the fates (and I’m guessing the Yoshimoto media machine) had other ideas in mind.

And so there I was, showing up on Japanese television, shouting “USA” like a total madman (or a dude at a political rally, take your pick), breaking out into a full flop sweat before getting roasted and “made fun of” by one of the three gods of Japanese comedy.

My phone exploded with text notifications.  Everyone on twitter sent me their favorite screen grabs.  Seemingly everyone I ran into backstage suddenly knew who I was.

I guess the Japanese comedy gods were smiling on me in their own way. 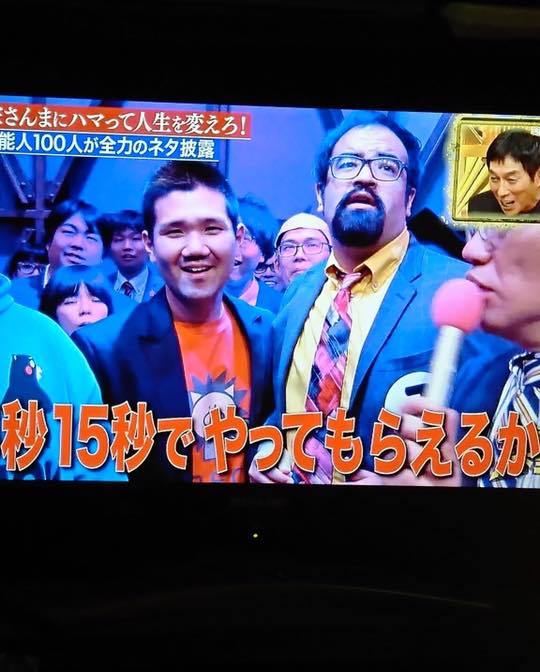 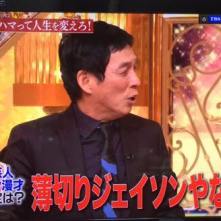 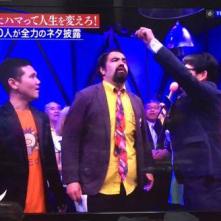 Oh, and the total sum payment for these two appearances?  Zero yen.  That’s right.  But I guess I’m getting paid in recognition.