So there I was, trapped outside my small crappy, 450 dollar a month apartment in Mito, Japan but with the sudden hope that it wouldn’t be like this for long.  With the help line phone number given to me when I signed my lease in hand, help would surely be on the way and I’d be back inside my nice, less-cold-than-outside apartment before long.  That was what I thought.  And I was dead wrong. 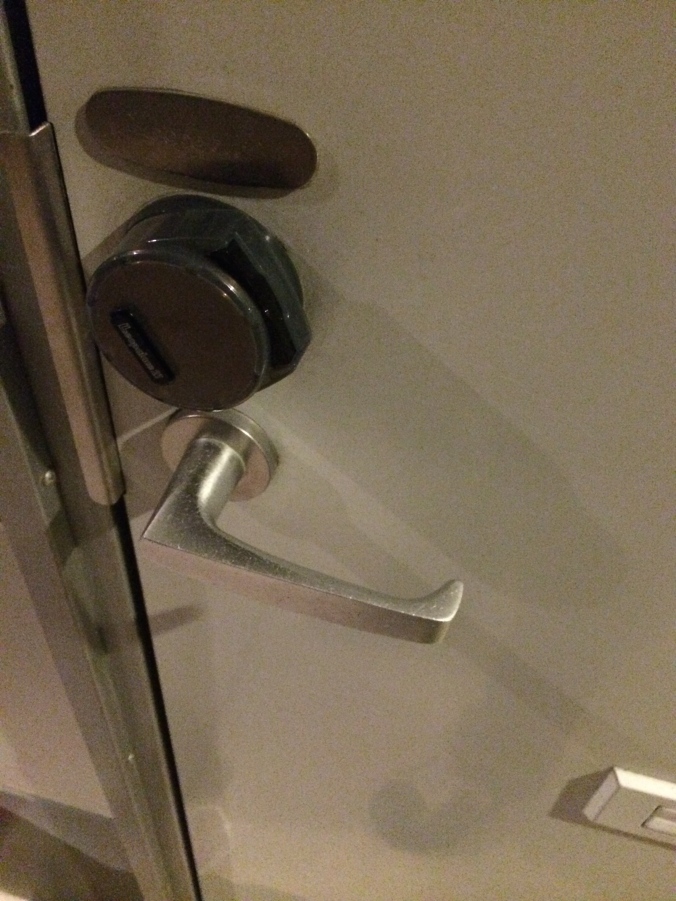 That’s okay, I didn’t want to go inside my apartment anyways.

Since it was Saturday, my first call into the national center was immediately sent to the robotic call system, where I was subsequently met by a fast wave of words and the typical “For mental counseling and health services press pound and three, for rent information press pound and four” goodness.  By this time it was around 8 PM and I was beginning to doubt whether or not I’d ever see the inside of my apartment again.  While I can understand a lot of Japanese, it’s slightly more difficult to understand a language when it’s (a) coming at you through a small iPhone speaker and (b) being spoken into what sounded like a 1930’s style rotary phone.  Damn these Japanese apartment companies and their insistence that they give their employees a weekend.  Nevertheless, I forged ahead, traversing the gulf in telephone techonology between the 1920s and the 2000s, and dug down deep to figure out what needed to be figured out.  (Actually I just randomly dialed numbers until I got to the key desk.  Then and only then was I fianlly able to talk to another human being.

Dude in some office somewhere: “I see… Have you tried putting the card in the right way?”

Dude: “Have you tried putting the key in upside down?”

Me (realizing at this point that this was not going all that well):  “Yes.”

Dude:  “And did anything happen?”

Me:  “No because the key isn’t working.”

Me: (Address omitted because I don’t want stalkers)

Dude: “And how long have you been living there?”

Me: “About four months.”

Dude: “And what is your name?”

Dude: “Well, it’s listed here under (name of my company).”

A minute of awkward silence follows.

And so I was left in frozen silence again, the ass of my nice pair of slacks now tan from the fact I’ve been sitting on the cold concrete outside my door for the past thirty-something minutes.  At this point, I was pretty sure I wasn’t going to hear back from them and that it would be a better bet to abandon ship and just start looking for a hotel, but, not being one to quit on anything, I decided to wait all the same, each minute bursting with the ache of an eternity.  Three or four minutes couldn’t have passed before the dude from the apartment company called back but it felt like a couple of weeks.

Different (but similar sounding) dude: “Sorry for the wait.  We’ve spoken with the locksmith company and have determined it will possibly be at least two and a half hours before someone can reach you.”

Dude:  “We apologize for the inconvenience.  Please be sure to have a proof of identity with you to present when they arrive.”

It occurs to me now how much trouble I would have been in were I not a crazy hoarder person who pretty much carries every single potential item of identification with him at all times but rather a normal human being who just carries a wallet and phone around with him.

The apartment company dude hung up on me before I could finish.  And thus the long arduous wait began.

Really, I should have taken the guy at his word when he said the door people would come around in two and a half hours.  But, this being prudent, ultra-timely Japan, I was, for some reason, fairly certain the dude was joking when he said it would take two hours and that the locksmith would be pulling up at any moment to save the day.

It can be said that, to that point, I was but a naive little boy.  The ordeal of that night hardened me into the cynical man that I am today.

It was going to take the key guy a couple of hours to get to my apartment despite the fact I lived in a city with a population of 225,000.  Why?  Well, first off, it was Saturday night.  Secondly, my apartment’s wonderful state-of-the-art lock system requires special attention that normal key people can’t provide.  Lastly, it’s Japan, so you know there was probably half an hour worth of standing at the magazine rack in a convenience store looking at a manga girl’s boobs to account for somewhere in that two hour time frame.

So with this massive wait ahead of me, what did I do?  Did I abandon ship and head somewhere warm to wait out the frigid night until the key man got to my apartment or did I do the dumb, manly thing and spend two freaking hours waiting out there in the cold?  Hint: When in doubt, just assume that I’ve made the stupidest choice possible.

I waited two long, frozen, blustery hours.  I waited and felt the heat radiating from my extremities, leaving me shivering and chittering in the Mito night.  In the process, I saw my neighbor for the first time, some dude in full business attire leaving his apartment to presumably go to work at nine at night.

The wait was so unbearable that I fell into crevaces so deep in my soul that I hardly even knew they existed, the depths of my depravity knowing no bounds.  Yes, I was so distraught, so traumatized that I almost floundered into the cold, lifeless depths of playing Candy Crush, the storm ocean from which there can be no return.

A fate worse than Hell.

Then finally, when all hope seemed to be lost and my numb, frost-bitten fingers inched closer and closer to the ‘download’ button, a phone call.  It was the door guy.  He was on his way.

Were my tear ducts not frozen solid by the below freezing weather, I would have cried tears of joy.

By the time the locksmith showed up, it was rounding 11 PM, almost a full four hours after the ordeal began.  But of course, this being Japan, there was tons of administrative time wasting stuff to get through first.

Whipping out my California Driver’s License, I gave an emphatic, frozen croak of agreement.  One problem:  It didn’t have my Japanese name on it but rather my American one which is obviously an issue because my Japanese name was on all the paperwork.

“Let me make a call,” said the pasty pencil-thin dude tasked with letting me into the safety of my home.  Two minutes on the phone later, he could confirm that the California Driver’s License was in fact a picture of me but not proof of my identity.

This wasn’t going to stop me though as, my hoarding tendencies shining through, I quickly whipped out a copy of my Proof of Residence certificate.  After a brief glance though, this also would not prove to be enough thanks to my company being supernice and signing my lease for me.

“Do you have anything with your company’s name on it?”

Panic quickly set in once again.  This time I was sure I was screwed.  I knew I had a bloodstained copy of my contract somewhere in my backpack but (a) I didn’t want to have to deal with the surefire questions about how the blood got there in the first place and (b) I was pretty sure the contract wouldn’t serve as proof of my existence.  At this point, I was just digging through my backpack in an effort to not look like a total moron who was permanently locked out of his apartment.  Then, to my luck, I struck gold.

Deep within the recesses of my backpack, lodged somewhere between the family of rats and the video tape that proves Bigfoot is real, I found an envelope stuffed to the brink with loads of important health insurance stuff that I had completely forgotten about.  (I’m a relatively healthy 22-year-old, what the hell do I need health insurance for?  YOLO, amirite?)  Without really thinking, I retrieved the small packet from its dark, synthetic fabricky grave, really grasping at strings at this point like a dude who was completely unprepared for a marathon around the 20 KM mark.

As it turns out, this was good enough as my blue healthcare booklet thing was registered with my company (Health insurance in Japan involves a lot of, surprise, surprise, paperwork.  Thanks Obama.)  After a quick call to the mothership back in Tsukuba (a convenient one and a half hour car ride from my city, helping to account for the time discrepancy), the man was right on the task and my long nightmare was finally drawing to a close.

As soon as the key guy pried my door open with a crowbar like an enforcer infiltrating a crack den in an HBO copshow, I was inside my apartment with the heater on full blast, desperately trying to regain feeling in my extremities.  It was but a matter of minutes before my skinny, pale savior had the old lock and keys replaced with an identical set.

“Maybe you should try opening the door more slowly,” he said with some of that trademark Japanese hesitancy that comes out whenever they have say something that isn’t glowingly nice about another person.  And then he was gone.  No money exchanged hands, my apartment company apparently eating the cost of having a guy drive clear out from the other side of the prefecture on a Saturday night (I suppose I’ll find out when next month’s bill rolls around).  Total time spent waiting for the locksmith? 3 hours.  Total time the locksmith spent replacing my keys and lock? 10 minutes.   And did I learn anything from the experience?  Probably not.

This goes without saying but I slept like a baby that night.