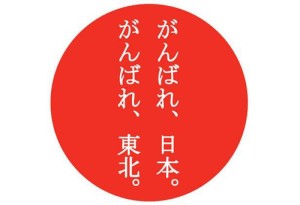 The rallying cry of an entire nation

Three years ago around this time, the lives of millions of people living along the entire northeastern side of Japan changed forever.  Only a few kilometers east of where I sit today, tsunami waves ravaged coastal communities, obliterating centuries worth of traditions and family businesses in the blink of an eye.  Several dozen kilometers north of me, the Fukushima Daiichi Nuclear Plant would also be hit by massive waves that reached a reported 133 feet high in some areas, setting off a chain of events that have removed thousands of people from their long-standing homes in its radius.  Even today, more than 267,000 people remain displaced by the events of March 11th, 2011, many residents of communities that no longer exist after being swallowed whole by the churning arms of the angry sea.

Living where I do, between the greater Tokyo community and Tohoku, I am placed in the interesting position of being in a place that was spared of much of the earthquake’s wrath but one that has still suffered much of its psychological damage, affected by the disaster nevertheless.  One of my co-workers is originally from Fukushima but moved for the sake of his young family following the aftermath of the nuclear disaster.  But a short train ride away, the coastal port town of Oarai is struggling to return to normal after being hit by the tsunami (though it was further down the coast than the hardest hit areas,  the town was still hit with a considerable amount of water).  Many of you may have seen images of a whirlpool in a harbor from that day.  That harbor was Oarai.

But only an one hour train ride away is Fukushima prefecture, a name that has now become synonymous with nuclear disasters and radiation leaks but was even ravaged more by waves of biblical proportions that ripped out the hearts of entire communities with unwavering cruelty.  The train line that once ran from Tokyo, through Mito and Fukushima, to Sendai in the heart of the northeast now effectively stops at the border between Ibaraki and Fukushima, the tracks from that point on either washed away or smack-dab in the middle of a nuclear exclusion zone. 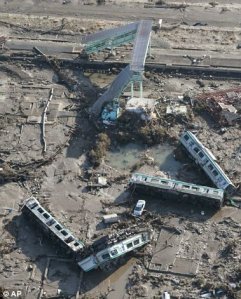 I ride this train ever week just about an hour from where this picture was taken. (Kyodo)

Almost everywhere I look, I can see banners, signs, flyers, ads, streamers all sporting the same message: 「がんばっぺ茨城」 (ganbappe Ibaraki).  がんばっぺ, or it’s more common form がんばれ, is an interesting phrase in that while there are various ways people can translate it into English, there’s really no term in English that really comes close to capture it’s meaning.  I’ve seen がんばれ translated as “fight” (Keep fighting, Ibaraki!), “keep at it”, “do your best”, and various other forward momentum terms for putting 120% of one’s effort into doing something but none of them really seem to come close to the Japanese word, no matter how many syntactic hoops one jumps through.  So I could try to tell people in Tohoku, Ibaraki, and all of Japan to keep on fighting and to keep on keeping on, but, at the end of the day, がんばれ is all that needs to be said.  And that’s the mentality here and all across the northeastern portion of Japan I now seem to call home.  Something terrible happened but there’s nothing to do but keep がんばれ-ing until those terrible days have somehow vanished from the land.

People don’t seem to smile here as much as they should.  And after what they’ve had to go through, who can blame them?  In many ways, the March 11th earthquake signified the end of a way of life for the people of Tohoku.  While most of the international media world has decidedly turned its eye from the plight of the survivors of the earthquake save for the occasional nuclear meltdown fear-mongering, people are still struggling to this day.  Over 11,000 people were killed that day, thousands more still missing.  The number of stress-related deaths attributed to 3/11 has increased year by year.  Over 267,000 people remain refugees, countless more have been forced to move away from the long-time familial homelands.  Entire cities remain empty or washed away in the North, many never to be populated again.  It’s all enough to make someone’s head spin.  Millions of lives changed forever in the blink of an eye.  Think about that next time you complain because you can’t find a parking spot at Walmart or you have to wait ten minutes in line before you can order your triple-milk soy latte from Starbucks.

Having moved here only four months ago, I did not have to experience those terrible days after the earthquake and tsunami, the uncertainty of the fates of those that I love, the despair when someone dear never came home, the ache of a hometown lost, never to return again.  The worst thing that almost happened to my hometown was our basketball team leaving.  In other words, I will never be able to comprehend the events that continue to rock Tohoku.  I can’t relate to their sadness so all I can try to do is make them smile.  A foolish sentiment maybe, but one that increasingly drives me forward.  I want to see people laugh.  I want people to forget the troubles of their life if only for one fleeting moment.

Today is a day to be thankful for the lives that we do have, to be thankful that our loved ones are safe and sound, to be thankful for the roofs over our heads, the clothes on our back, the times we laugh when something funny happens.  Today is a day to remind ourselves of those people who unfortunately cannot do the same, a day to keep the victims of one of the worst natural disasters the world has ever seen in our hearts.  Today is a day to remember to take a page out of the Tohoku playbook.  When things are rough, when times are dark, grit your teeth, tighten your belt, lace up your work boots, and がんばれ like it’s the last thing you’ll ever do.  Maybe you’ll even learn something in the process.