Some times on my weekend, I get bored.  And when I get bored, I like to eat.  I know, not necessarily the healthiest of time-killers, but I like food, dammit.

This Thursday (my Saturday), I decided to take a bit of trip to a veritable tsukemen Mecca located but an hour and a half by train from my current home base of Mito.  Ranked number one by just about everyone as having the best tsukemen in Japan (and thus, barring unforeseen circumstances, the world), Tomita, a small-ish restaurant located in the Tokyo “suburb” of Matsudo in Chiba prefecture routinely draws hour long waits thanks to a constant stream of revelers aching to take in the glory of a good bowl of noodles and soup.

I’m not lying when I say that 50% of the “hub” train stations in Japan look EXACTLY the same.

I arrived in Matsudo at around 2:30 in the afternoon and head for Tomita（とみ田）, but a short five minute walk away from the main train station in town.  Since I was arriving after the lunch rush and on a weekday to boot, there had to be a good chance that I could get in and eat my bowl in a reasonable amount of time, right?

Upon arriving at the deceptively empty queue, I was informed by a kindly staff member that it would be at least two hours before I could be seated.  Yes.  A two hour wait.  On a Thursday afternoon.  Slightly dejected, I placed my order (to maximize production efficiency, Tomita has you buy your meal ticket beforehand and hand it while you’re giving them your phone number so as to be informed when your seat is ready) and gave the nice dude out front my name and phone number so they could let me know when the excruciating wait was over.  That’s right, kids, Tomita pretty much operates like your local suburban Outback Steakhouse, only with less diarrhea-inducing blooming onions and more umami.

So, now left with two hours to kill before I could get my food, I naturally did what any sane person would do and went to find MORE ramen to eat.  You see, while Matsudo has gained a bit of a reputation as the home of Tomita, there are also a handful of other highly regarded ramen places within walking distance.  And when I say within walking distance, I mean within walking distance.  Take, for example, Matsudo’s SECOND best ramen shop, Tonikaku （兎に角）, located a whopping five minute walk down the road from Tomita.

Unlike its neighbor, Tonikaku, despite the generally great reviews it receives, boasted no wait for its food and in fact had a good half-dozen seats or so open at the counter when I arrived.  Since I knew I was going to be chowing down on more noodles in but a few short hours, I settled for something light, a normal-sized bowl (I’m not a barbarian, after all) of Abura Soba, essentially a bowl of ramen with the usual broth replaced by a small amount of sludgy condensed version instead.  In the summer, the dish proves especially popular since people generally don’t eat piping hot soups to beat the heat.  Generally, eating abura soba is a good way to taste the individual components of a bowl of ramen if you’re a total nerd and into dissecting bowls of food like some sort of culinary Steve Irwin. 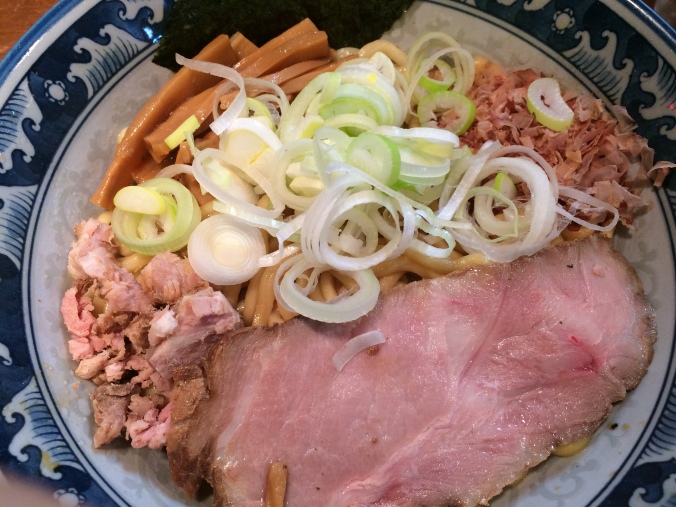 Tonikaku employs an especially strong pork broth in its cooking (in case you couldn’t figure it out from the GIANT SLABS OF PORK served in every single bowl of ramen, the people who make ramen aren’t particularly concerned with making sure what they’re serving is Kosher or Halal or paleo-diet friendly or whatever food thing it is you do now.) and you can literally feel the pork fat clinging to your taste buds as you dig into your bowl of ramen, something that, while distracting, didn’t detract from the overall flavor of the thick noodles, shredded pork, pickled bamboo shoots, and small pile of bonito fish flakes all mixed together.  That said, the sheer fattiness of the condensed pork broth was almost too much and I found myself struggling to get to the end of the bowl.

A good bowl of ramen will feature a broth that clips to noodles without inundating them. Tonikaku’s was no exception.

Overall rating: Three and a half Stephens out of five.

While this was a solid bowl of noodles, it wasn’t mindblowing and, as I said, the indulgence of the broth was almost too much to handle, though that’s what I deserve for ordering something that literally has the Japanese word for fat in its name.

Not feeling the abura love? They have other stuff too.
Tonikaku’s in-store menu (sorry for the bad photo. I ain’t no photographer.)

To be continued… (Next time: I hit the tsukemen holy grail)